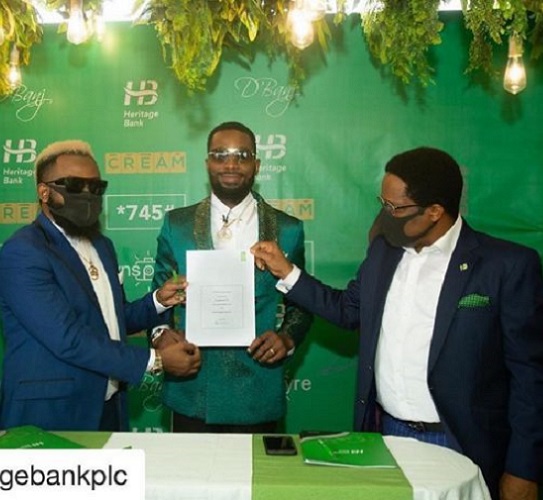 Things are getting really intense for Nigerian music icon D’banj has many companies associated with him pull out of their relationship due to the rape scandal surrounding him.

One of such brands is Heritage Bank Nigeria, who recently revealed him as a brand ambassador.

The bank suspended D’banj as its brand ambassador asking that he clears his name beyond any reasonable doubt before the partnership can continue.

This news was revealed in a sketchy manner by media personality Vimbai on Instagram. She shared that a brand had halted working with D’banj until he cleared his name.

His suspension comes shortly after the Inspector-General of Police Mohammed Adamu asked for a probe of rape case involving a high profile Nigerian.

Meanwhile many Nigerians have signed an online petition seeking other brands to drop D’banj over the ongoing rape scandal.

If you are neutral in situations of injustice, you have chosen the side of the oppressor. – Desmond Tutu. . . We have to allow the wheels of justice to turn, but until then we have to stand in alliance with the process of justice because we don’t know which one of us may need the credibility of that process to fight for us tomorrow. . . Thank you to this organization for choosing to let things play out.

How do you get justice for an alleged wrong by committing a fraudulent act?

Now that Heritage bank has stripped him of his deal, I hope you'd be able to sleep at night knowing you took food from a man's mouth

If he's guilty, let him face the music but only then#DbanjSuspended pic.twitter.com/GaXicMDeEK

"Being suspended" is temporary thing.

That was the right decision by Heritage bank or in fact by anyone he's dealing with.

Reputations on the line for every party.

Dbanj should now prove his innocence and get back with the bank.#DbanjSuspended pic.twitter.com/3funbGYmVJ

Over 15,000 sign petition to s t r i p D’Banj of UN appointment and all His Endorsement Deals!!! . Over 15,000 people have signed an online petition calling on the United Nations to s t r i pOladapo Oyebanjo aka D’Banj of his appointment as United Nations Ambassador for Peace. . They also called the attention of brands such as Heritage Bank Africa, One Africa, CSA Global, and other establishments associated with D’Banj to end their commercial relationship with him and stand in support of victims of s e x u a l violence. (Swipe to see the Petition) The petition which was started by one E.Pooola 20 hours ago on Change.Org had hit 15,000 as of 3pm on Friday. . It read in part, “We call on the United Nations, and United Nations Women Africa organisations to remove Nigerian artiste Mr Dapo Oyebanjo as a youth ambassador and distance themselves from his actions following the sponsored kidnap of Seyitan who accused D’Banj of r a p e and s e x u a l assault which happened in 2018. . “Women in Nigeria are increasingly at risk of s e x u a l violence and the United Nations and United Nations Women Africa as an entity committed to the empowerment of women should not be seen to associate themselves with alleged r a p i s s t s, abusers, and kidnappers. . “We ask the United Nations and United Nations Women Africa to support and lend their influence in helping Seyitan get justice for the abuse she endured in 2018 and the harassment and bullying in the past weeks.”