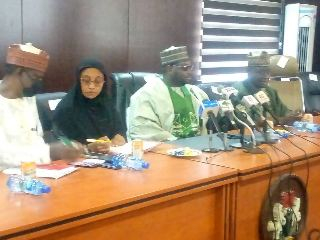 A former member of the  House of Representatives representing Birnin Magaji and Kaura Namoda local government councils of Zamfara state,  Aminu Sanin Jaji, has  warned former governor of Sokoto state, Alhaji Attahiru Dalhatu Bafarawa, to mind his language on issues regarding the state.

Jaji gave the warning at a press conference on the activities of the committee set up by the Zamfara state government for collection and distribution of relief items to victims of banditry in the state under his chairmanship.

Jaji described the recent statement made by the former governor on the efforts made by the Zamfara state government to eradicate suffering among its people as politically motivated and it lacks sense of maturity.

“I wonder how Alhaji Bafarawa as one of the personality who also doesn’t know anything about Zamfara state issue can make such statement,” he said.

He warned Bafarawa to stay away from any issue regarding Zamfara state and concentrate on his state.

“I am cautioning the former governor, Bafarawa to mind his language and stay away from our state issues in the name of peace,” he added.