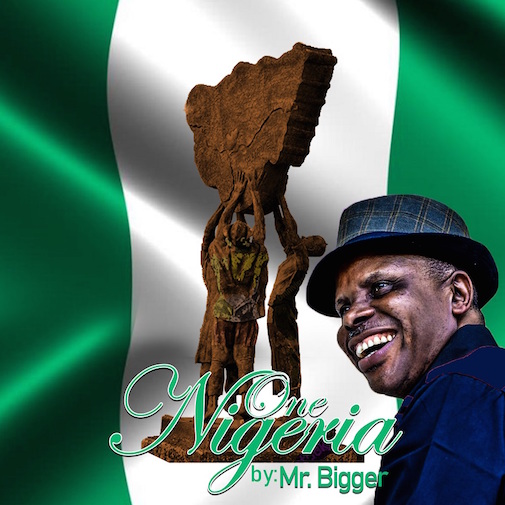 Mr Bigger Ibekwe dishes out his brand new single which he titled One Nigeria.

One Nigeria By Mr. Bigger Ibekwe is a deep-rooted work, divinely inspired, challenging Nigerian Citizens to build their Country into a UNITED AND SINGLE NATION!

The song is not a physical art-work but a spiritual clarion call on Nigerians to Lift-up their Hearts and Heads and take a second look at their Father Land. To hold hands in unity and oneness, to make themselves a weapon and raw materials for a fresh NIGERIA.

This CHANT is a product and results of a 14days SPIRITUAL EXCURSION, prompted and motivated by a statement credited to the Vice President, Prof Yemi Osibanjo.

Trained in the simplicities and complexities of the ARTS AND MUSIC.
A graduate of Theatre Arts, Journalism, Linguistics, and International Relations, with emphasis on Conflict Resolutions, MR BIGGER sings GOSPEL MUSIC.

His first Album, RAPTURE was released in 2016. His Second Album, HEAVEN’S TELEPHONE NUMBER done in 2018 is still making waves.

ONE NIGERIA released in 2019 is propaganda material done by divine instructions for rebuilding, rewriting and reworking of Nigeria

Married with four kids, according to National regulations, his involvement in Production Industries makes his associates call him THE INVESTMENT DRIVER!