Olamide Gbenga Adedeji, a multi talented Nigerian rapper and YBNL boss, has made an announcement concerning his music career that has gotten a lot of people talking.

The rapper took to Twitter to reveal that he is almost through with his new album, which he is currently working on. He did, however, confess that he has no idea when the record he’s working on will be released.

The musician stated that he is taking his time with his album in order to achieve the greatest results. He did say, though, that his album might be the final one he releases, but that he will continue to release singles from time to time.

“Next Album = #Unruly 95 percent ready Release Date = I don’t know,” he tweeted. I’m taking my time to make it the finest it’s ever been… I’m quite sure this will be my final album, although I’ll release singles every now and then if I feel like it. It’s been a frenzied dash for assassination!! giving back-to-back albums”.

Check out “My New Album Might Be My Last – Olamide” below!! 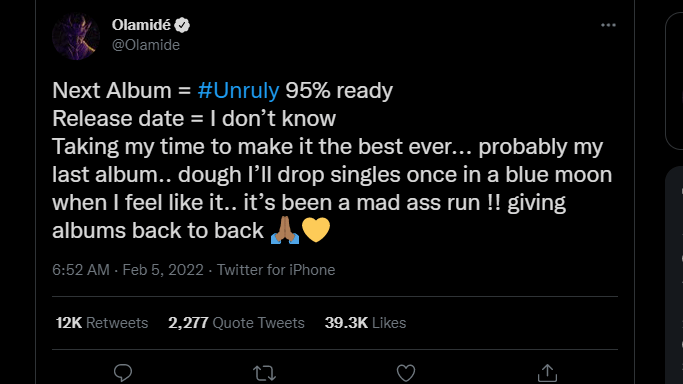 About Mr Successful 1413 Articles
Hey my name is Successful, I've been on the internet business for many years now. Hustle to be free from poverty & May God Bless Our Hustle 🙏