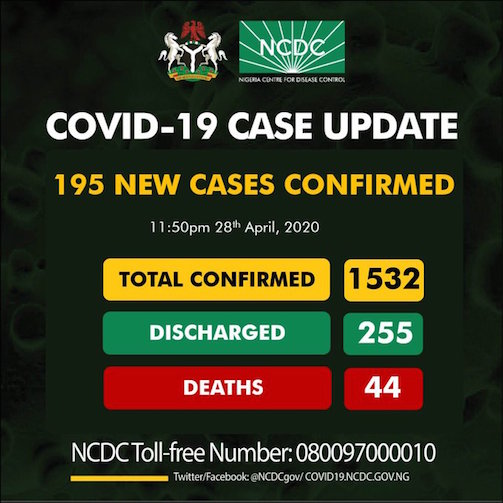 Nigeria has recorded its highest number of coronavirus (COVID-19) cases in one day with 195 new cases announced on Tuesday, April 28, 2020.

Lagos State recorded the highest number of cases with 80, according to an announcement made by the Nigeria Centre for Disease Control (NCDC).

38 new cases were also recorded in Kano hours after its testing centre was reopened. Ogun and Bauchi each recorded 15 new cases

Gombe recorded 10 new cases, followed by Sokoto with nine new cases, five each in Edo and Jigawa, and two new cases in Zamfara.

Nasarawa is the latest Nigerian state to record an index case, a traveller that recently arrived the state from Kano which has recorded the third highest number of cases in Nigeria.

Cross River, Kogi, and Yobe are the only Nigerian states yet to record a coronavirus case.

A total of 1532 cases have now been recorded in 33 states and the FCT.

255 people have recovered and been discharged since Nigeria’s index case was announced in February.