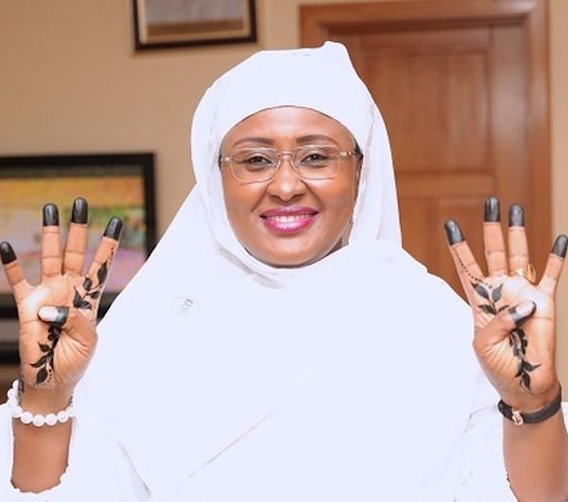 Aisha Buhari Jets Out To Dubai For Delivery Of Her Daughter, Zahra.

This revelation is against widespread belief that Mrs Buhari was in Nigeria at the moment especially after she lent her voice to calls by young citizens for an end to police brutality earlier in the week.

Nigeria’s First Lady, Mrs Aisha Buhari, is currently in Dubai, United Arab Emirates, with her entourage ahead of the expected delivery of a baby by her daughter, Zahra.

This revelation is against widespread belief that Mrs Buhari was in Nigeria at the moment especially after she lent her voice to calls by young citizens for an end to police brutality earlier in the week.

On October 17, the First Lady posted a video on social media that had a photo of President Muhammadu Buhari in a meeting with service chiefs using the hashtag #AChechijamaa, meaning “rescue the people” in Hausa language.

The post had a song titled “Arewa na kuka” meaning “the North weeps” by Kannywood star, Adam Zango, playing at the background.

With that act from Mrs Buhari, many citizens had thought she was in Abuja, Nigeria’s seat of power, and in solidarity with the people.

But findings by SaharaReporters have revealed that the First Lady had been out of the country for several days now and is not likely to return until after her daughter is delivered of her baby.

Recall that in August, SaharaReporters revealed how Mrs Buhari flew out to Dubai under the guise of a health emergency in a jet belonging to billionaire Mohammed Indimi for the purpose of shopping for luxury items in preparation for the wedding of one of her daughters, Hanan.

The First Lady’s trip was packaged to look that way in order not to raise eyebrows for violating government’s restriction on international flights due to the Coronavirus outbreak at the time.

The Nigerian Government had on March 23, 2020 banned international commercial flights to curtail the spread of COVID-19 in the country.

But that protocol was broken to have the First Lady fulfill her wish.

Hanan’s marriage to Mohammed Turad, son of a former lawmaker, Alhaji Mahmud Sani Sha’aban, who represented Zaria in the House of Representatives from May 2003 to May 2007, took place on September 4, 2020, inside the Presidential Villa.

Zahra, who is, however, due for delivery any moment from now, is married to Ahmed, son of billionaire Indimi.

They tied the knot on December 16, 2016 in a lavish ceremony that had some of Nigeria’s most influential persons in attendance.