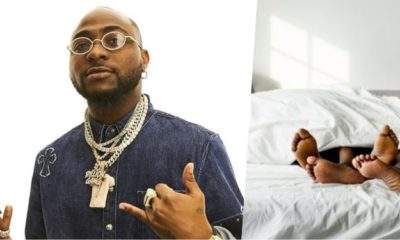 Davido Said He Can’t Remember The Last Time He Made Love.

DMW and 30BG head honcho, Davido has revealed in a new interview that he cannot remember the last time he slept with a woman.

In a chat with TheBeat99.9 FM in Lagos, the singer was charged with a 60 seconds question and answer session where he revealed that he hasn’t had sex in a while.

When asked about his biggest misconception about himself, Davido stated that it would be the idea that he is rude.

On how he sleeps at night, O.B.O burst into laughter, then responded, “probably with my clothes on.” The father of three also noted that his favourite song of all is ‘Damiduro,’ one of his hit singles from 2011.

Watch the video below …