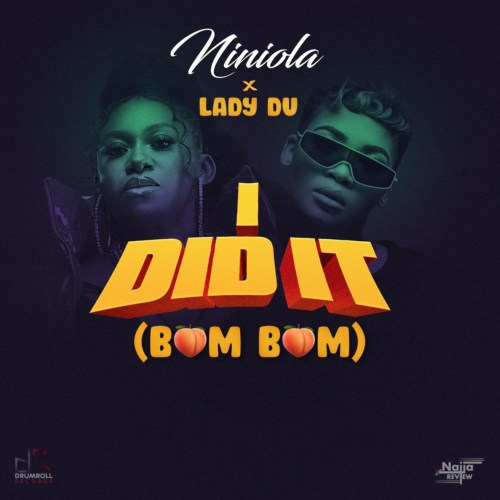 Here is a brand new song titled “I Did It (Bum Bum)” by a Nigerian singer, Niniola featuring South African Amapiano artiste and DJ, Lady Du.

As The Queen Of AfroHouse, Niniola prepares to release her new Amapiano/AfroHouse Ep (Lagos To Jozi) in November, she releases the second single off the extended play titled “I Did It (Bum Bum)” in collaboration with Lady Du.

In her own words “Everyone knows this is my playground so I decided to make this project to keep you on the dance floor”.

Niniola is one of the most successful and acclaimed female artists in African music. Hits like “Maradona” and “Boda Sodiq” have won her glowing endorsements from the likes of Drake and Timbaland; none other than Beyoncé has looked to her for musical inspiration, borrowing from “Maradona” to compose “Find Your Way Back” from the iconic singer’s Grammy-nominated The Lion King: The Gift project. Making Niniola a Grammy Nominee. With the release of the albums; ‘This Is Me’ & ‘Colours And Sounds’ NINIOLA has owned the title – Queen of Afro House.

The new song is a follow to Nini’s still popping hit single, “Too Sweet“. “Too Sweet” (“O Dun” in Yoruba), is laced with the signature Amapiano and Afrohouse sounds with some smooth rhythmic Niniola vocals delivered in both English and Yoruba.