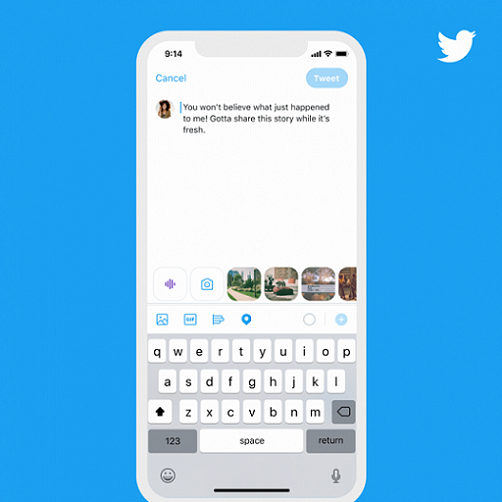 Twitter has introduced a new feature for iOS that allows users to record a snippet of audio and tweet it.

“Over the years, photos, videos, gifs, and extra characters have allowed you to add your own flair and personality to your conversations. But sometimes 280 characters aren’t enough and some conversational nuances are lost in translation,” writes Twitter’s Maya Patterson and Rémy Bourgoin in an official blog post.

Rolling out today on iOS, you can now record and Tweet with audio. pic.twitter.com/jezRmh1dkD

“So starting today, we’re testing a new feature that will add a more human touch to the way we use Twitter – your very own voice.”

Here’s how to use Audio Tweets:

Step 1: Open the Tweet composer and tap the new icon with wavelengths.

Step 2: Look for your profile photo with the record button at the bottom – tap this to record your voice.

According to Twitter, each voice Tweet captures up to 140 seconds of audio. But don’t let that stop you if you have more to say. Once you reach the time limit for a Tweet, a new voice Tweet starts automatically to create a thread.

Step 3: Once you’re done, tap the Done button to end your recording and go back to the composer screen to Tweet.

“People will see your voice Tweet appear on their timeline alongside other Tweets.

To listen, tap the image. On iOS only, playback will start in a new window docked at the bottom of your timeline and you can listen as you scroll. You can also keep listening while doing other things on your phone or on the go.”