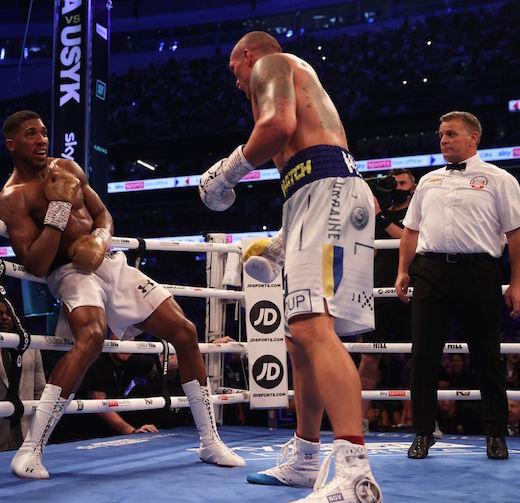 Undefeated Ukrainian challenger Oleksandr Usyk (19-0, 13 KO) cashed in on his biggest boxing match to date earlier yesterday (Sat., Sept. 25, 2021) live on DAZN from inside Tottenham Hotspur Stadium in London, England, when “The Cat” shocked Anthony Joshua (24-2, 22 KO) via unanimous decision. As a result, Usyk walks away with the WBA (Super), IBF, WBO and IBO heavyweight titles.

Joshua was the bigger and stronger fighter coming into this main event showdown, but it was Usyk who utilized his speed and timing early. The former Olympic gold medalist jumped out to an early lead on Joshua and really never looked back. Joshua saved some face with the home crowd by stealing some of the later rounds, but Usyk’s consistency and precision were really on display.

In the end, Usyk did more than enough to hand Joshua his second professional loss and capture some pretty nifty heavyweight hardware. Usyk also launches himself into the mix with fellow heavyweight fighters Tyson Fury and Deontay Wilder with this impressive victory.